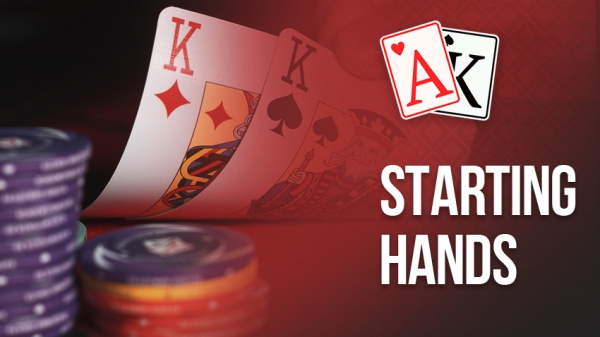 In previous poker lessons, we covered poker hands ranking. If there's something you didn't manage to memorize or understand, then get back and study this material again. After all, these are poker basics.

The below article will no doubt expand your knowledge of poker: we'll dwell on starting hands in poker and find out the algorithm of pre-flop actions: which cards are to be played and which ones are to be folded.

There are 169 different two-card starting hand combinations. All pocket hands in Hold'em fall into five categories presented in the table below.

Unconnected cards (two bottom lines in the table) might be one, two, three-gapped, or more. The bigger the gap, the less chance you have of hitting a straight. For instance, if you’ve got

for the straight. But having

you could hit a straight with

Having connecting cards such as

you can hit straight with

However, if you have

there’s only one possibility of a straight:

The Best Starting Hands in Hold’em

The starting cards value depends on bets' structure and other factors. There’s some disagreement amongst poker players as to which two card starting hand combinations are the best. Poker win is hard to predict, and this is what makes the game so attractive. However, a quality player's training is not of less importance. You should constantly work on improving your game. Most players will agree that it's desirable to enter the game having premium hands - a pair of kings and aces.

These two starting hands are the strongest. Players call them “monster hands”. It’s not so often you’ll get dealt aces or kings. According to statistics, you get either aces or kings once in every 110 hands. Why these hands are considered to be the best? If you've learned our previous lessons, you don't need an explanation.

However, you should be aware that even aces or kings can get cracked. In addition, they don’t play too well against multiple opponents, which means you should definitely raise pre-flop to reduce the number of opponents. You should be extra cautious when playing kings, as if an ace falls on the flop then you will easily lose to anyone having a single ace in their starting hand.

Anyway, aces and kings are undoubtedly the strongest pocket cards you might have.

Queens and Jacks are great starting hands. They are dominated by aces and kings, but they are a favorite against all other starting hands. Of course, you may face a player holding a pair of aces or kings, but it doesn't happen too often. Play these cards confidently, and don’t be afraid to risk.

is known throughout the poker world as Big Slick, many refer to as "monster hands”, and when suited is often called Super Big Slick. While it isn’t a “complete hand”, unlike a pair, it offers great potential. Ace/king, suited or unsuited, dominate many other hands like

This next group of starting hands is also strong enough. You can definitely raise the pre-flop with any of them too. We’ve already talked about the power of

are also very strong and often run into weaker ace combinations. Even though most of the time you’ll be winning pre-flop, you should be careful with hand like

Why not fold any of your cards in anticipation of the best hand? If you wait for the best cards to come, you'll lose the blinds only, but sometimes the waiting might take too long. Here's the table of your odds to get one of the starting hands:

The issue of odds and statistics is covered in details within our articles. We hope this will help you understand that premium cards fall out not too often and put up with this fact.

Another special group of cards is small pocket pairs. To play them, you need to enter the game cheap, wait for a set to come on the flop and grab the entire stack of your opponent. Yet, these are not all the nuances you should know about playing small pairs. Watch our video to learn more.

, you will hit straight, but players holding

even will easily beat you. Likewise, holding a flush, you need to be careful with players who may have a higher flush. It's preferable to enter the game with suited connectors, they suggest a chance to collect both straight and flush.

The word ‘kicker’ means a card that doesn't contribute to your hand. For instance, if a player holds a triple of queens, two other cards will be the kickers. If two players have collected identical hands, the winner is determined by the highest of the cards (kicker), not included in the combination.

Let’s say a player enters a game with an ace and a small card. He's sure he'll win, but in the end, loses a bunch of money. How come? For example, a player calls with

, and the flop comes

. What does the player do? Bets? Calls? Goes all-in? What if the flop comes

? The player gets a pair, which is very hard to play. The flop could come

x. The player gets two pairs, aces and sixes, but this happens only 1 out of 49 hands (2%). And if your opponents will enter the game with pocket aces too? You will definitely lose. Until you learn when and how to play

x go slow with it.

You’ll often hear novices responding to a question of why they played this or that hand with the line “because they were suited”. It’s certainly better to start with suited cards, but don’t fall into the trap of playing any two cards suited cards just because they happen to be suited. The odds of collecting a flush is 1 out of 118 hands (0.8%).

Starting hands is a complex issue. If you ask a professional player should I play this hand, the response would almost certainly be “it depends!”

The Number of Players

might be losing against nine players, but it will be considered a strong one if there are just three more at the table.

Another major factor is the player’s position at the poker table. The later your position in the betting order - the better, as you get to decide what to do after most of your opponents have acted. While acting first you rely mainly on your intuition. It’s a part of poker that lends itself to be exploited through experience. The only recommendation we can offer you so far is: the earlier the position is (farther from the small blind), the stronger the starting hand to be played should be. If you are the last to act, then up to 70% of Texas Hold'em poker starting hands will be good for you.

Whether or not there was a raise should be a very important factor in making the decision to play a particular starting hand. If there has been a re-raise before you’re due to act, then you should only consider playing with a very strong hand that you don’t doubt about. Of course, this will also depend on the personality of the other players and on the type of the game, but the basic rule is like that.

Keep saying that professionals shown on TV are playing almost any hands? Sometimes they really do. But they are the real masters of the game having a wealth of experience. Until you gain more poker playing experience of your own, proceed with caution and only play the best hands.

Instead of learning from your own mistakes, read our articles. You'll learn what poker math is and how to "read" your opponent.  And then compare your game "before" and "after." You'll be pleased with the result!