How to play with pocket monsters 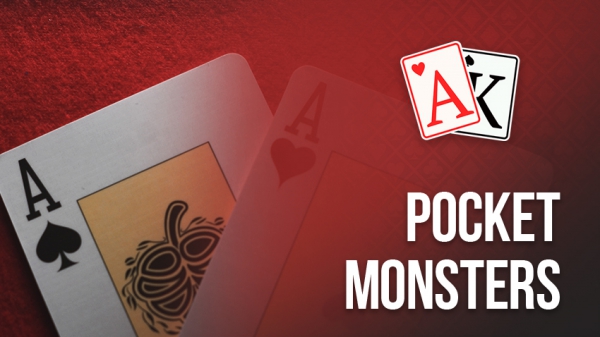 The strongest starting hands in poker are kings, aces and AK. If you got these hands preflop, you are a big favorite to win a pot. However, the poker combination consists of five cards and aces, kings or AK are just two of five.

This article is about the ways to maximize the winnings with the strongest holdings and typical mistakes beginners make with these type of hands.

AA is the strongest hand in no-limit hold 'em. It is dealt once in 220 hands. When you got

, your goal is not only to win a hand, but also get maximum value from your opponent.

If you are the first player to enter the pot, make a standard raise. Forget about limps or raise of a bigger size. A qualified player will notice the difference and adjust.

When you make a limp, you allow other players to see the flop cheap. They can catch a strong hand with random cards and crack your aces.

If there was a raise before you, the best option is 3-bet. Some players make calls but don’t over-complicate. 3-bet with aces is never an error.

On the postflop, you can choose between aggressive and cautious lines. To choose the one you are to estimate the board. Is it scary or not? Is there a danger of getting under flush? If the board is dry, don’t hesitate to make bigger bets to extract maximum value. If the board is wet, keep the pot small.

If you lost a pot with aces, it ok. There no starting hands in Holdem, that wins every time.

is the second best starting hand in Holdem. Everything said about aces concerns kings as well. Anyways, folding kings preflop is a mistake. If you get into aces, don’t be upset. It happens. You did everything right. Next time opponent will have kings and they got under your aces. It's poker, baby.

If you have kings, the last card you want to see on the flop is an ace. It weakens the kings but it doesn’t mean you are to give up immediately. Just slow down a bit. Use pot control and remember that kings are still good.

is a rather difficult topic for beginners. This hand is rather strong, but novice players still make a lot of mistakes with it.
What are the advantages of AK? This hand is better than all non-pair hands and it has approximately 50% against all pairs but kings and aces. Moreover, AK has blockers to kings and aces. It means that the chance of your opponent has pocket kings or aces is less.

Play AK in aggressively. The call is acceptable only in position. Most of the times it is not a mistake to play for stacks with AK.

If you didn’t catch pair with AK, it doesn’t mean the hand is lost. You have to overcards. It is a good reason for a bet. If the turn doesn’t improve your hand, slow down. Maybe its time to give up.

Aces, kings, and AK are the best hands in Holdem. But to extract maximum value from these hands, analyze the board.