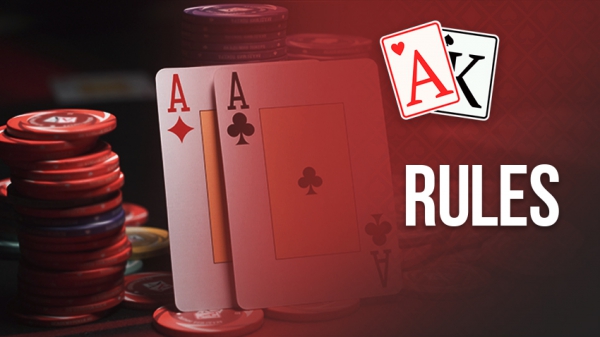 Texas Hold'em is the most popular poker game in the world. Therefore, in this article we will dwell on the rules of this poker type.

You will hardly find any reliable information on the exact date and place of this game appearance. Most probably it was founded in the US (to be more precise - in Alaska) in the form known to us today.

For the first time, the rules of Texas Hold'em were approved in 1900 in Texas (Robstown) which the game actually owes its name. But it became really popular after the first tournament in this game type was held in 1969.

According to Mike Sexton, the World Poker Tournament (WPT) commentator and poker pro, “it only takes a minute to learn Texas Hold'em poker rules and the whole life to become a master.”

How to learn to play poker? One of these game features is that it consists of many layers. So, having started your journey around the poker world, you'll never stop discovering new things.

How to play Texas Hold'em? The rules.

Let's break down in detail all the stages of poker game.

Hold'em is usually played by nine or ten players. Picture 1 shows typical positions for this poker type. In this example, there are ten players with the same stacks (the chips' number) at the table. 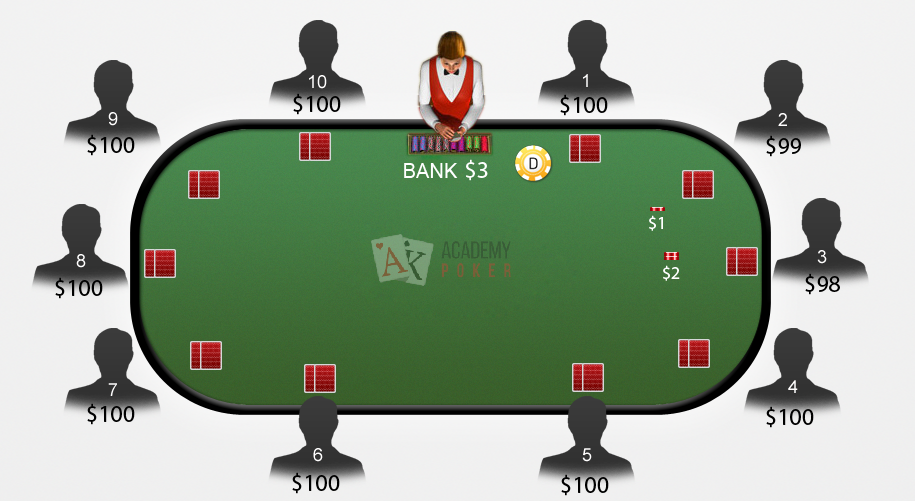 The dealer chip labeled "Dealer" or "D", is a very important part of the game, it indicates who deals the cards and takes the “button” position. The person with the button is viewed as being the dealer for the hand. If you're playing in a casino there will be a professional dealer dealing the cards to everyone but himself. However, the dealer button will rotate around the table. Once the hand completes the player with the dealer button will pass it to the player on his or her left.

So, firstly the cards are dealt to the player to the left of the button, and then clockwise. In picture 1, the dealer chip is at the player 1. In the next hand, it will pass to player 2, and then to player 3, and so on. In a company without a professional dealer, players hand out cards (are being dealers) in turn.

The dealer's position (button) is the most favorable in the game. The player at this position is the last to bet when all the decisions of the other players are known to him. The exception is the first betting round since the blinds enter the game immediately after the dealer.

After the small and big blinds are bet, each player is dealt two cards, face down. These are the hole cards. The best starting cards, according to Texas Hold'em rules, are two aces. The first betting round starts at pre-flop.

Preliminary round or pre-flop

Betting starts after the poker blinds have been put out and hole cards have been dealt. This round is called pre-flop. The first to enter the pre-flop betting round is the player to the left of the big blind (in picture 1 it is player 4). He can match the amount of the big blind, which according to our example is $2, raise or fold. If a player decides to fold, he throws away his hand face down into the middle of the table and waits for the next deal to play again. Once a player has made his action the player to the left of him gets his turn to act. Each player is given the same options: bet, raise or fold.

Generally, betting rules may seem a bit confusing for novices. In picture1 (above), you can see that players 2 and 3 put out small and big blinds. If all players to the left of player 3 decide to call the bet of $ 2 (meaning also bet $2), the move will pass to the small blind, player 2, who has put out just $1 so far. Now he has a choice - to bet $1 and match the bet, raise or fold, losing $1 in this hand. Regardless of his decision, the big blind bets the last.

If the player decides to raise on the big blind (player 2), all the other players must either raise or fold. For example, let's assume that players 4 and 5 call the big blind $2, but player 6 decides to raise to $4. All the players to the left of player 6 shall now either match a $4 bet, or raise again, or fold. Since player 2 is already in the small blind, he adds just another $3. Players 3, 4, and 5 have already put out $2 each, so they shall add another $2. According to the Texas Hold'em poker rules, they also have got a choice: to raise or fold. Picture 2 shows what might happen: 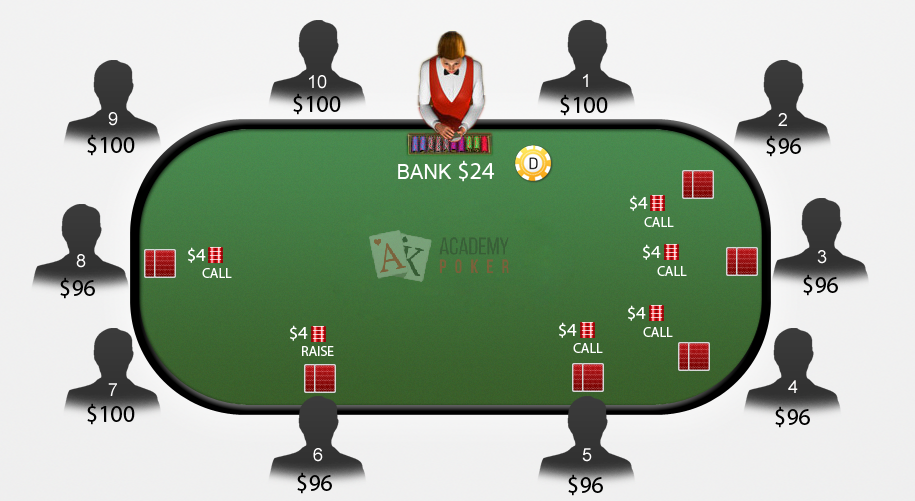 After the first betting round is over, according to the rules of the game, the dealer puts out three community cards into the middle of the table. All remaining players use these three cards along with their two starting cards to collect the best hand. These three cards are called the flop. You can see an example of it in picture 3: 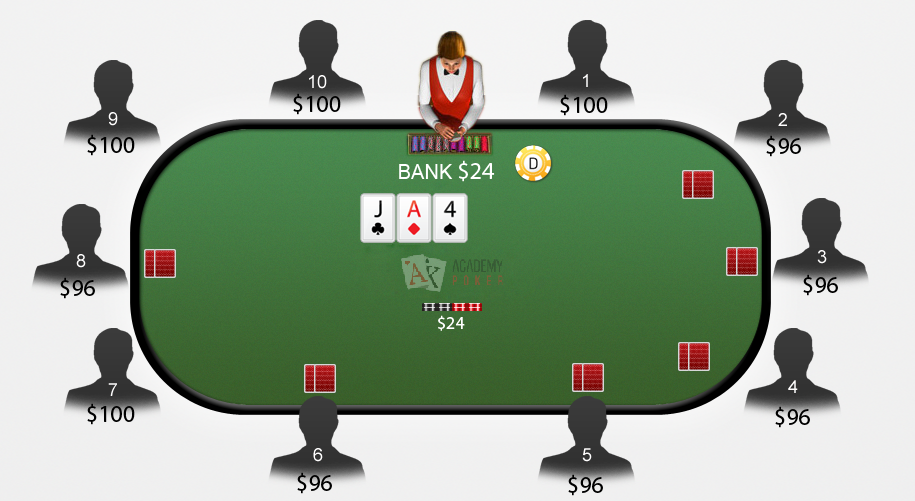 As you can see, in picture 3 all the bets of the previous round make up the pot ($ 24). The flop is followed by the new betting round. The player to the left of the dealer bets first. In our example, this is the small blind, player 2. Obligatory bets no longer exist, and the player has two options - to check or put chips in the pot. "Check" means that a player stays in the hand without a raise, if the number of chips he put out corresponds to previous players' bets. When a player checks, the move passes to the next active player, who can also check. If a player wants to skip, he says "check" or taps on the table (or clicks an appropriate button if playing online poker).

However, if someone decides to start betting and make a bet, then according to the Texas Hold'em rules, the next players cannot answer by check and shall match the bet, raise or fold. It also applies to all the players having previously checked. After all, the bets of the round are made or all the players have checked, the next betting round can be started. In our example, players 2, 3, 4, and 5 have checked after the flop. But player 6 bet $4, and player 8 matched him. Players 2, 3, and 4 folded, but player 5 matched the $4 bet. These three players move to the turn.

Once the betting round on the flop completes, another card is dealt, which is called the turn. As you can see in picture 4, there are only three players left in the draw, the rest have folded on the flop. 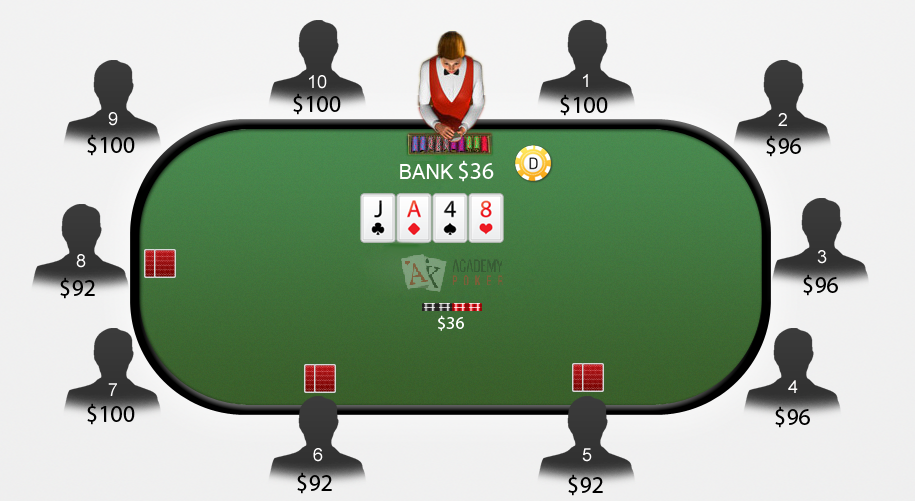 The pot now is $36: $24 of the first round and $12 after the flop. With the 4th community card, a new round starts according to the same Hold'em rules as the previous one. Betting traditionally starts with the first active player (remaining in the draw) to the left of the dealer. In our example, it is player 5. He can check or bet. Let's assume that player 5 checks the same way as players 6 and 8. If all players check, the round ends and we move to the “river”. Since no one bet, the pot didn’t increase.

After the third round of betting is completed, a fifth final card called "the river" is dealt. Picture 5 shows the situation after the fifth card is put out on the table. 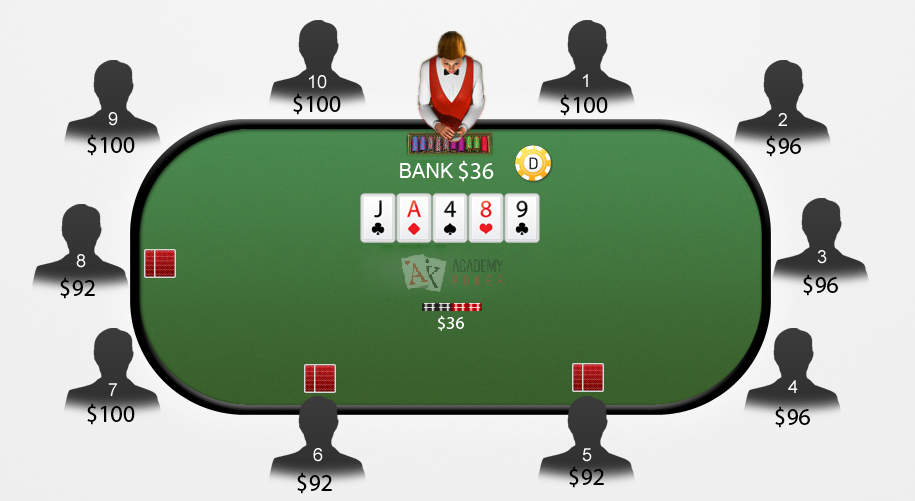 A new betting round starts. Let's assume player 5 bets $4, player 6 raises with another $4 (the bet is now $8), player 8 folds, and player 5 calls and adds $4 more. If the last betting round ends with two or more active players, we move to the showdown - the final stage of the game.

At this point, the best 5-card poker hand wins the pot. Now that all the cards are on the table, each player shall make the best 5-card hand possible using any combination of two hole cards and the five community cards on the table. This is the time when the players show their cards. According to the rules, the player who raised last (player 6) opens his hand first. In picture 6, both players open their hands: 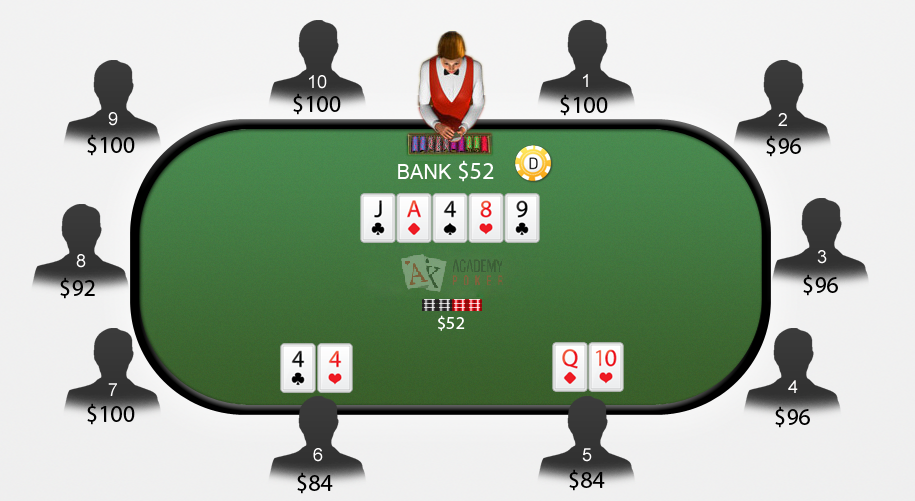 Whose has got a winning combination?

According to the poker rules, the hand can be completed even before the players get to the flop. In our example, we’ve got to showdown. But if player 5 has bet, let's say, $8 at the pre-flop, and no one matched it (everyone folded), then player 5 would have taken the pot. The same may happen on the flop, on the turn, and on the river. Imagine a boxing match where an athlete can win in the first round with a knockout or can stand for 12 rounds, and the victory will be determined by points’ number.

In addition, if you got to the showdown, you are not obliged to use your two cards. If your best combination consists entirely of cards lying on the table, then you are said to play on the table. For example: if the five community cards (flop, turn, and river) make up the royal flush, the best poker combination, all the remaining active players share the pot, regardless of their cards. Even though each player has got seven cards, only five of them make up the combination - the top five.

When playing Texas Hold'em, the hands are ranked as follows:

The “high card” is not a combination, it's just that its value is taken into account when the opp has no combination as well, or in cases when the players have got similar hands. For example, both have identical pair or two pairs. In a straight, a straight with an ace is also possible, where an ace will be counted for a unit - A-2-3-4-5 (small straight). Obviously, some hole cards combinations may get strengthened on the flop, the turn or the river. For example, a pair of suited connectors (

and so on) can “catch” a straight or a flush on the river in nine cases out of a hundred. By the way, the pair dealt doesn’t justify itself as often is it may seem, and the chances of collecting a set are not much higher than getting two more (a pair) to one of your two hole cards in the course of the game. Such situations should always be taken into account when making decisions at the betting stage in a particular round.

Above, we've covered the rules Texas Hold'em FL $2/$4 game, where all bets, including raises and re-raises, are fixed. In this case, everything is pretty simple - in the first two betting rounds (pre-flop and flop) the first bet' size (including the big blind) equals the lower limit ($2), and in the third and fourth (the turn and the river) - the upper limit ($4). The small blind is always equal to half the big one. The number of raises is limited as well - no more than four in each betting round.

According to the rules of No-Limit Hold'em, the maximum bet can be of any amount and is limited only by the sum of money you have on you (stack). The number of raises is unlimited as well.

We do hope that this article was very useful for you. These were the basics of Texas Hold'em; further, we will work on more theoretical material to be used for a successful and profitable poker game. If you find it difficult to master or understand the material, don't miss your chance to get 5 free poker lessons. Just enter your email below.