Every player should have an aggressive strategy in his arsenal.

We have already mentioned it before that today’s poker becomes more and more aggressive. This is particularly true in tournament play. The best poker players know how to evaluate the situation and deal with weaknesses. Every player should have an aggressive strategy in his arsenal.

Situations Which The Re-Raise Will Be Effective In

The first stage in learning about the power of re-raise is to be able to identify situations in which it could be effective and profitable. Sure, there are situations when you re-raise, and the villain holds two Aces, but it’s worth taking this risk if you’ve got premium cards.

RISK/REWARD. This is simple: you should clearly understand that there must be enough chips in the pot to justify the risk, or your stack in relation to the blinds is relevant. For example, if the blinds are 10/20, you and your rival both have 1500, and he raises to 60, re-raising is not relevant here as he will hardly fold.
TOURNAMENT STAGE. A bubble is the best time to reraise or resteal because any player hardly wants to miss the chance to win the pot and be knocked out on the bubble. This could be one of the final tournament stages or even the final table.
STACK SIZE. If the stack is big enough, and there’s a sufficient number of chips in the pot, then you can re-raise and re-steal and have two possible situations: 1) everyone will fold, or 2) they will call, and you’ll continue your aggression on the flop and/or on the turn. If there’s a chance your rival will call, then act anyway, as you’ll get the advantage of aggression after the flop. Be cautious - make sure that your stack is sufficient to re-steal without going all-in pre-flop. If your stack is not big enough, you may easily get into an awkward situation on the flop. If your stack is limited, the best way to re-steal will be going all-in. Re-steals tend to be more effective and valuable on the late tournament stages, where the stack is smaller, and pot contains big blinds and antes.

STACK SIZE AND ODDS. Let’s assume you made re-steal by going all-in; it’s the best thing to do if you don’t want your rival to see the flop before making his next decision. They say that if the odds are 1 to 2, you should better call with almost any cards. It won’t always be correct, but since many players act this way, you can regard this as an opportunity to re-raise with a stack of 7-10M.
DANGER OF BEING KNOCKED OUT. When the situation is good for re-raise, consider your rival’s stack size. Don’t re-raise when having an average hand if his stack is big, as he has chips to call with. The best option to do this is against the ones, whose stack would be seriously damaged if they lose to you. If you have 15,000, and your rival has 22,000 with the blinds 500/1000, he will hardly take a risk. And even if he had a hand that could beat yours, then again, it's not likely he'd want to risk his chips.

YOUR RIVAL’S IMAGE. Have they been re-raising a lot, are they capable of folding or re-raising, will they go on playing against you, are they novice or mature players? These are the questions you should ask yourself. In general, re-raise is more effective against loose aggressive players. But always pay attention to who you are playing this way with.
YOUR IMAGE. The main question to ask yourself is “what according to my rivals my hand is?” If you have re-raised constantly the last 3 hands being in the blinds, you might be called in the next hand by someone who wants to check what your cards are. If you are playing good hands only, you could re-raise or re-steal, and get a fold from a rival having A-clubs/Q-hearts.
POSITION. The most popular position to make a re-steal from is the blinds because players often raise from other positions and especially with any two cards from the late position. You should understand, who is the player making a raise and what way he'll respond to your re-raise. Bear in mind that the later the position of the player, the wider the range he can bet and raise with. More information about positions can be found within the previous lessons of our online poker school.
YOUR CARDS. And finally, we'll move on to talking about your cards. This should be the last thing to think about when choosing the right situation for a re-raise/re-steal. Ideally, you will want to have premium cards to re-raise within case you get called. Cards like

provide only 40% of success against two overcards. When you multiply that by the % of the time your rivals fold, it will make the re-steal profitable. Be careful when re-raising with hands like

because if you get called, your odds will be just 25-30%. In general, if you have a hand that makes you feel the favorite pre-flop, you don’t need to re-raise too often.

Strategies for Playing Against a Re-Raise

Since more and more players start using re-raise in their game, you should master the technique of how to deal with it. Here are some tips you might consider useful:
DIVERSIFY YOUR GAME AND CALL IN LATE POSITIONS. If you raise in late positions, and everyone else folds to you being scared by your premium cards – you are doing fine, good job. Since there are not so many chips in the pot, they will not want to risk it.
RECONSIDER YOUR RE-RAISE REQUIREMENTS. Be sure to calculate what hand your rival may raise with. Is your hand better? For example, AJ will not always be relevant. Besides, your chances to beat a pair like AQ will be rather low.
STEAL MORE FROM EARLY POSITIONS RATHER THAN LATE. Sometimes raising from the button is perceived by other players to be stealing the blinds, and they will respond to your actions. But if you are doing this from an early position, nobody will suspect you of stealing. Everyone will think your cards are really good.
MAKE YOUR STRONG HANDS LOOK LIKE A STEAL. If you hold

in late position, consider all factors and bet a little more or less than your normal bet. If you always bet the same amount, it might look suspicious. In this case, the rivals may think you're simply stealing the blinds and will respond to your aggression.
REDUCE THE SIZE OF YOUR PRE-FLOP RAISE. Instead of raising the blinds 3-4 times, start raising 2.25-2.75. These raise sizes will be effective in the late stage of a tournament and reduce the amount of chips you lose. You might have noticed many players acting this way, but haven't wondered why.

Example of the game – Re-Steal with Suited Connectors

YOUR RIVAL: Your rival is a loose aggressive player. He doesn’t play every hand, and you are sure that he might raise in late position. Your play is rather tight. You haven’t played every pot and you have won the last few with quite good hands. The big blind in this hand is a very tight player too.

PREFLOP: One of your rivals raises to 3,700. You are in the small blind with 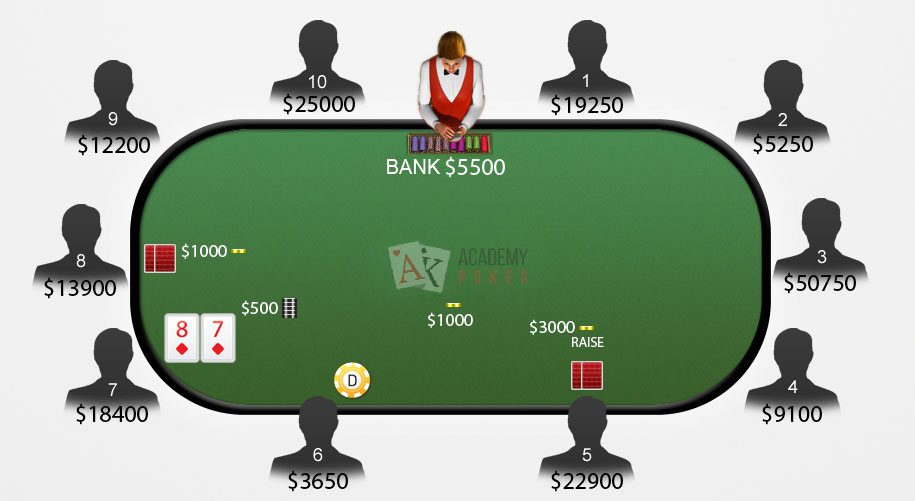 Should you fold or raise? The worst option is to call. You are out of position with an average hand against an aggressive player. Unless you hit the flop, you’ better get out of the game. Folding would be quite relevant in such a situation, but given your tight table image, the stage of the tournament and the stack size, you’d rather play aggressively and go all-in. You are giving your rivals 1 to 1.5, which makes calling unprofitable, and experienced players know that. If for some reason the big blind or your rival would call your bet, you’d still be in a not that bad situation.

Our next topic will be the “expected value” and how to calculate it correctly.

Stop bleeding money from the blinds