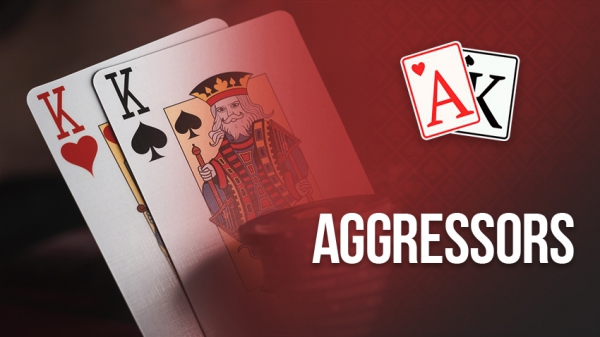 More and more players start playing aggressively. We gonna teach you how to act against such players.

Aggressive style brings more money, but many players use it ineptly, become predictable and therefore lose constantly. If you are sharp enough, the predictability of other players will help you identify their cards and make the right decisions. When playing against an aggressive opponent, you can't afford simply waiting for good cards to come, you have to play just as aggressively. This doesn't happen too often, and your rivals will immediately realize that you’ve got good cards if you keep waiting for them to come all day. Besides, you can play well even having medium cards. The manner and time will depend on the situation and your rival's features.

All the players behave differently, but we'll divide them into three groups of aggressive players and teach you playing against them.

Example of a game. Еxpand your opportunities

Player Information. The player to your right is very aggressive from the moment the tournament has started. He raises in late position all the time. The rest of the players play calmly.

PREFLOP. You are on the button, and an aggressive rival is in late position. As you've expected, he raises to 150. The players on the blinds hold 1500 chips each and play rather conservatively. You have

, which is not bad for a starting hand in this situation. Your cards are perfectly suitable to raise against an aggressive player. It can be weak suited connectors and cards like

, or pocket pair, including 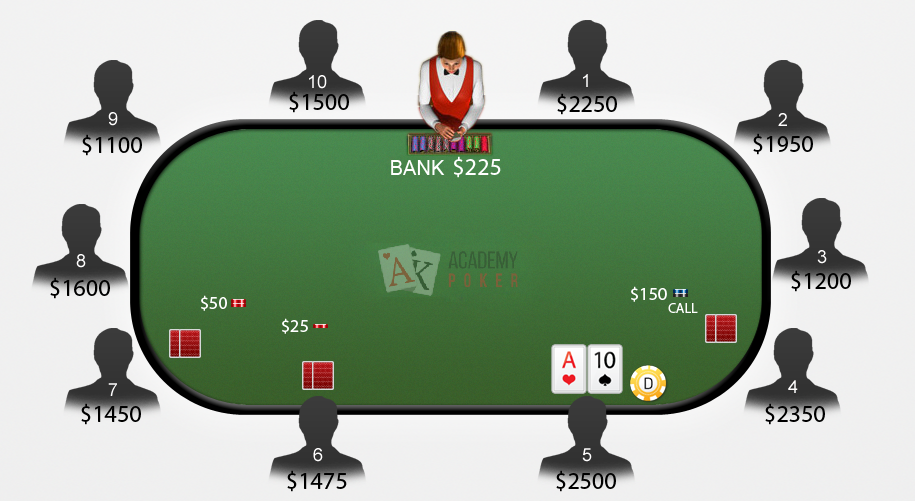 This situation provides lots of opportunities. The ratio of your stack to the blinds allows you to either fold, or raise, or just call. But since you know your opponent well and have got enough chips, we recommend calling in 50% of cases, raising - in 30% and folding - in 20% of cases. Having a large stack and small blinds, a call will be the best option to control the pot size. If you 3-bet with medium cards, then the flop, turn, and river might come poor, and you may lose too many chips. In addition, 3-bet may force your opponent to fold, and you don't really need this.

(rainbow). The pot is 375 chips, and your opp bets 250. What to do now? So, there's a possibility that he holds an ace and a high kicker, but don't forget you've started the game having medium cards against an aggressive player. You wanted him to show his aggression on the flop, so at this point, there's no need to get scared of being losing. 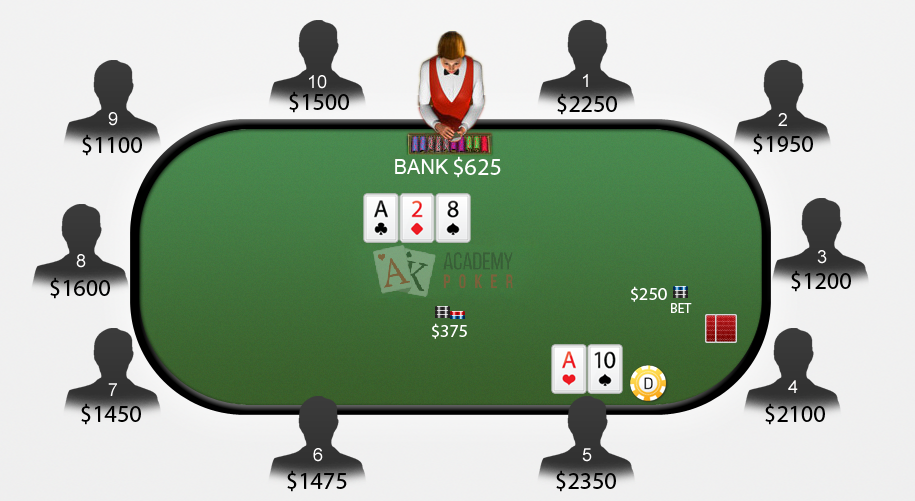 There are two ways this situation might develop, and your decisions should be based on how your rival sees you and on how you've played the previous hands. For example, if previously you were playing calmly, and have now suddenly decided to 3-bet, then he will fold any cards that you can beat. In addition, if previously you were matching weak pairs and have called right now, he will think that you have no aces. He’ll try to demonstrate he holds an ace. When making a decision on how to play a certain hand, always remember the way you've behaved in previous ones and consider whether your rival is capable of bluffing. If the answer is "yes", then we advise calling in order to induce his bluff.

, and your rival has checked. 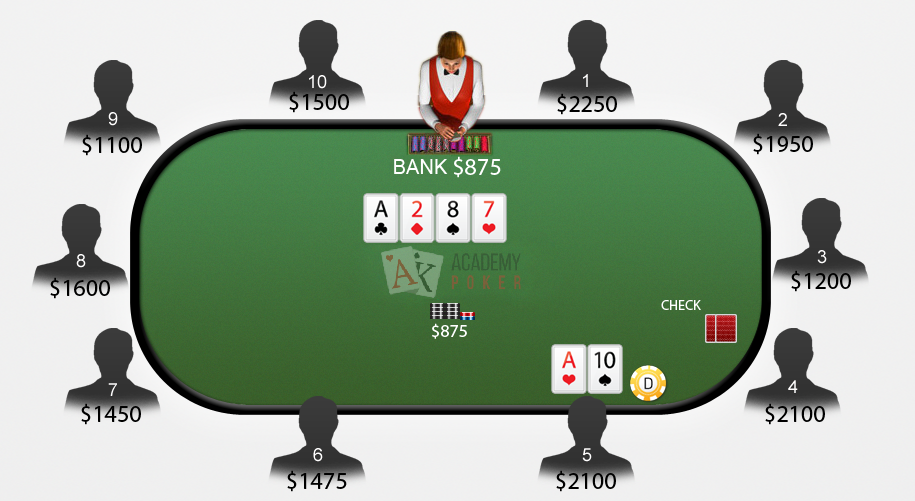 Sounds good. Since he hasn't bet on the turn, it might mean your hand is stronger at the moment. But should you bet? No doubt, you can afford it, but consider this properly, and try to predict how your rival will respond to your actions. If you think he'll call even if having bad cards (like a weak ace, middle pair, etc.), then make a bet. But due to your stack and pot size, an aggressive player can check/raise and thus put you into a precarious position. The pot is 875, you've got 2100 in your stack. Any relevant bet (for example 600-800) will be tangible for your stack, and any smaller bet will be like an attempt to complete a very strong hand.

You've been playing at this table for more than an hour and you know that this is a very aggressive player, so we’d advise you to check. We’ll check for two reasons: 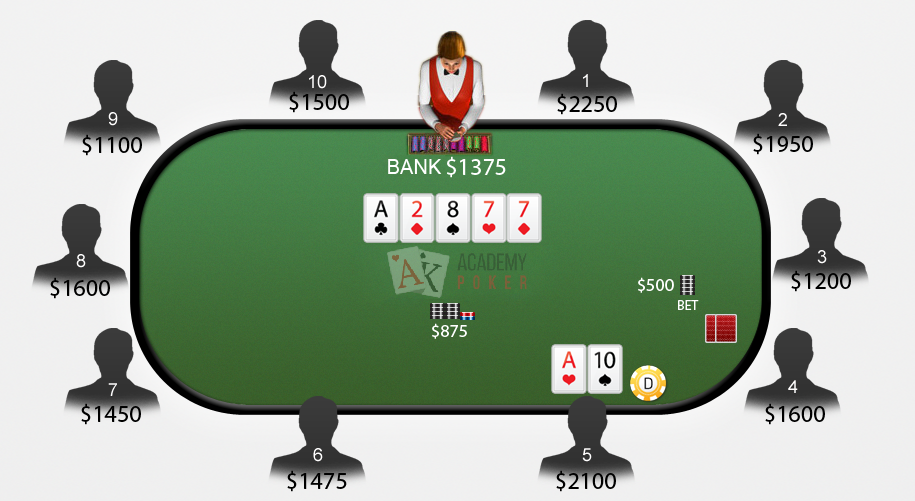 Since the villain can hold any two cards, and the odds for having a strong combination are quite low, he'll most probably be bluffing. Can he hold

? Sure, but sometimes it's worth making decisions based on the information you've got about this or that player and on his game features. You call, and your opp shows

, which is a pure bluff. You may wonder why we didn't raise if we'd been in the lead. Because any good player will bet only if he's sure a villain has got bad cards. If a villain had thought we were ahead, he'd have folded to any aggression.

Having learned how to play against aggressive players, we move on to study the strategy of the game against tight players.